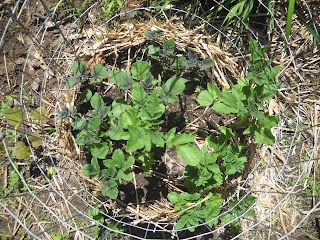 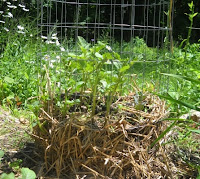 As of July 14, I had added soil two more times and the tower was about two-thirds filled. The plants are now producing flower buds. I added soil one more time. The mounds that I planted in the ground nearby have already started to flower so I have stopped adding more soil.They are still looking healthy and strong.

While the potato plants have been doing their thing with minimal involvement from me, I have been doing my thing! Finding great ideas for schoolyard gardens and funding sources to support them. More on that later!


Posted by Naturally Rooted LLC at 8:41 PM No comments:

Naturally Rooted LLC
Susanne Smith Meyer is the principle of Naturally Rooted LLC . She has BFA/BLA from the Rhode Island School of Design and is a licensed landscape architect in New Hampshire, Vermont, Maine, Rhode Island and Massachusetts. She works with hospitals, schools and municipalities creating landscapes for children. As a volunteer in the community, Susanne led a city-wide volunteer effort to build a community playground and serves on the city planning board. Susanne taps her maple trees, grows garlic and has completed her goal of hiking all 48 of New Hampshire’s 4,000 footers!